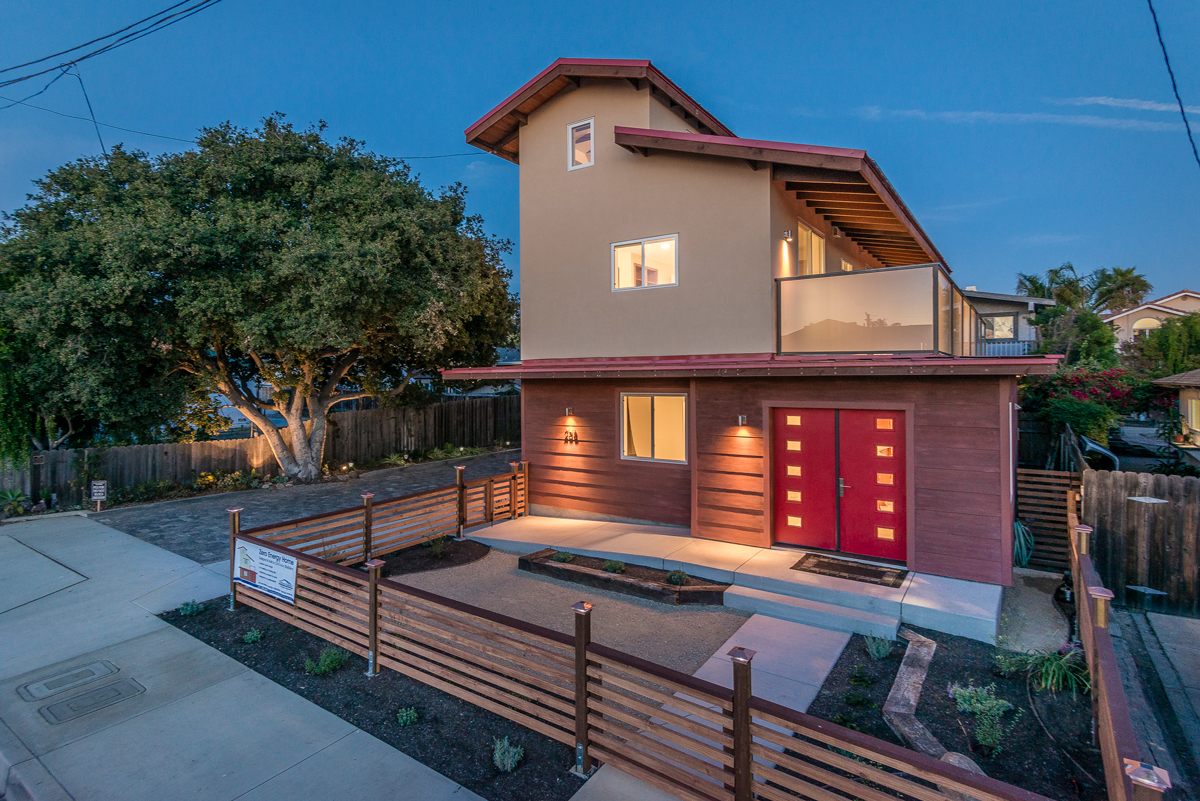 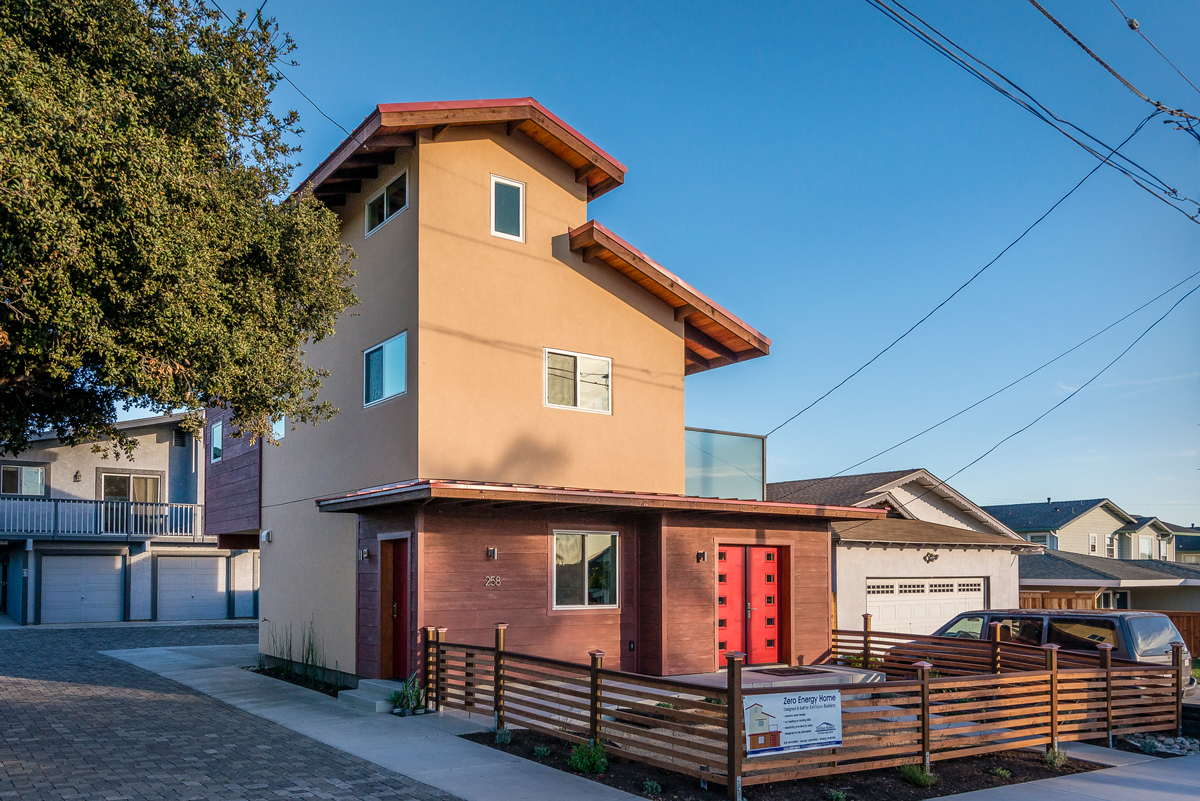 This client was looking for something exceptionally efficient that was not going to cost significantly more than conventional construction. The original home on the property was “distressed” and had extensive mold and pest damage and was almost a complete tear down. The site had very specific setback and footprint constraints. The walls of the existing home already encroached on the front and right setbacks, so portions the wall around the current front door and the south wall (to the right of it) had to be retained from the original structure. To meet grading and drainage requirements the ground floor had to be built 12” higher, so the walls were suspended in the air while the new foundation was poured under it. To meet fire code requirements, the driveway to the back apartment had to be widened, forcing the first floor to be reduced to under 600 sf. The client wanted to go upwards with a second floor to double the square footage.

This innovative solution was designed and supervised by Bruce Severance, CK Builders’ former Energy Division Manager. In order to keep construction costs lower, close attention was paid to energy usage and thermal performance. Because of the non-conforming setback to the south, the adjoining home casts shadows on the first floor, requiring creative solutions beyond the typical passive home formula. The second floor has great views of the dunes and Point Sal, so it became clear that a roof deck with second-story sliding doors would allow the sun in to warm the interior. However, thermal mass was needed on the second floor to store heat. The home is only one of two homes in California to incorporate a new phase-change material that allows ½” of drywall to have the same thermal storage capacity of 3-1/4” thick poured concrete. However, it may be the only home in the world to incorporate this material in a second floor assembly to yield the equivalent thermal mass of 14” of concrete and maximize direct solar exposure only in the coldest months of the year. Two inches of this phase-change material is imbedded in the second floor assembly is exposed to winter sun only from noon on October 15 to noon on March 1st, with less exposure in the mornings and evenings and no exposure at noon during the rest of the year.

Differential controllers and jumper ducts move heat to the first floor where an insulated slab can store additional excess heat. The result is a home that has a much larger “thermal battery” relative to its size than just about any other home in the world. It has already proven to keep interior temperatures around 78 degrees for days at a time whether the outdoor temperature is 105° or 35°. This technology has proven to work in Germany as well as extreme dessert climates, and it is more affordable than forced air systems with no operating costs and no maintenance costs –ever. 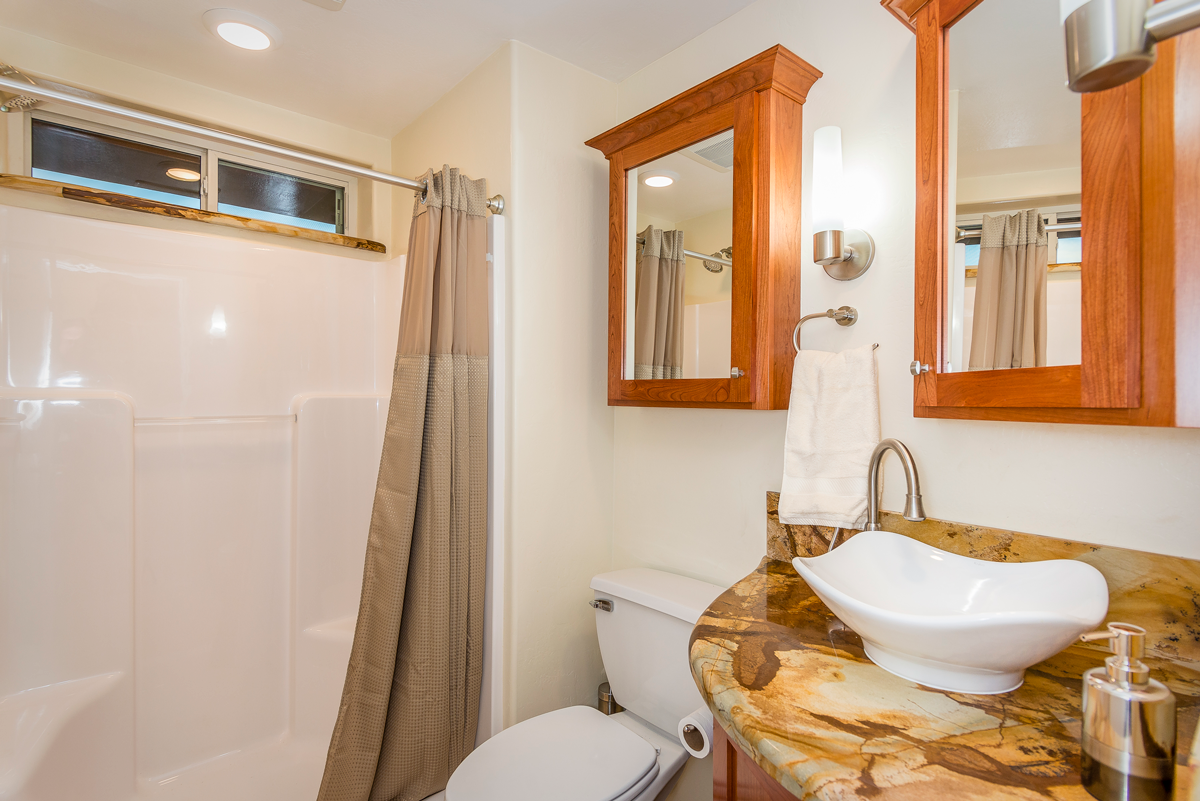 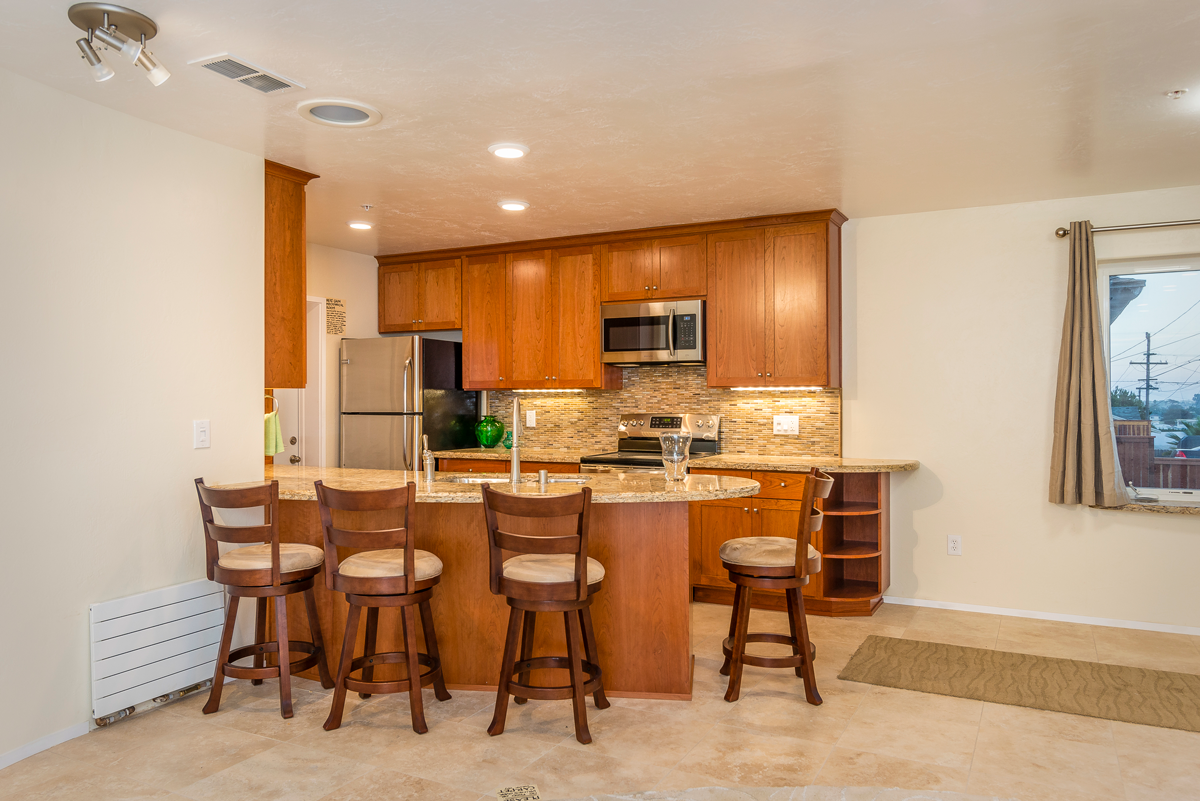 Computerized energy modeling of the home guided every design decision, from the 6’ overhangs over the roof deck to the R-33 wall assemblies and R-60 roof assemblies. The home requires only 3200 BTUs to maintain 78° interior temperature when outdoor temperatures fall to 30° F. Yes, that is not a typo. Typical homes this size require ten times the heat to stay warm. And the standard heat load calcs do not factor in the heating and cooling contribution of the passive solar features which will warm the home for days or weeks during cold weather.

The back-up heating system uses a small electric heat pump water heater to provide radiant heat to stylish slim-line convective wall panels. Because the water heater is located in a heat-gain mechanical room that stays above 90° year-round (by design), the efficiency of the heat pump operates between 450% and 550% allowing the home to be heated with the electricity collected from only four solar panels. To verify system performances, this case study house has a complex data acquisition system that monitors 40 parameters of data every minute, collecting millions of data points on all energy and heating systems. Jennifer Rennick of In-Balance Consulting and Paul Menconi, a renown energy guru collaborated with Bruce Severance to analyze the data. 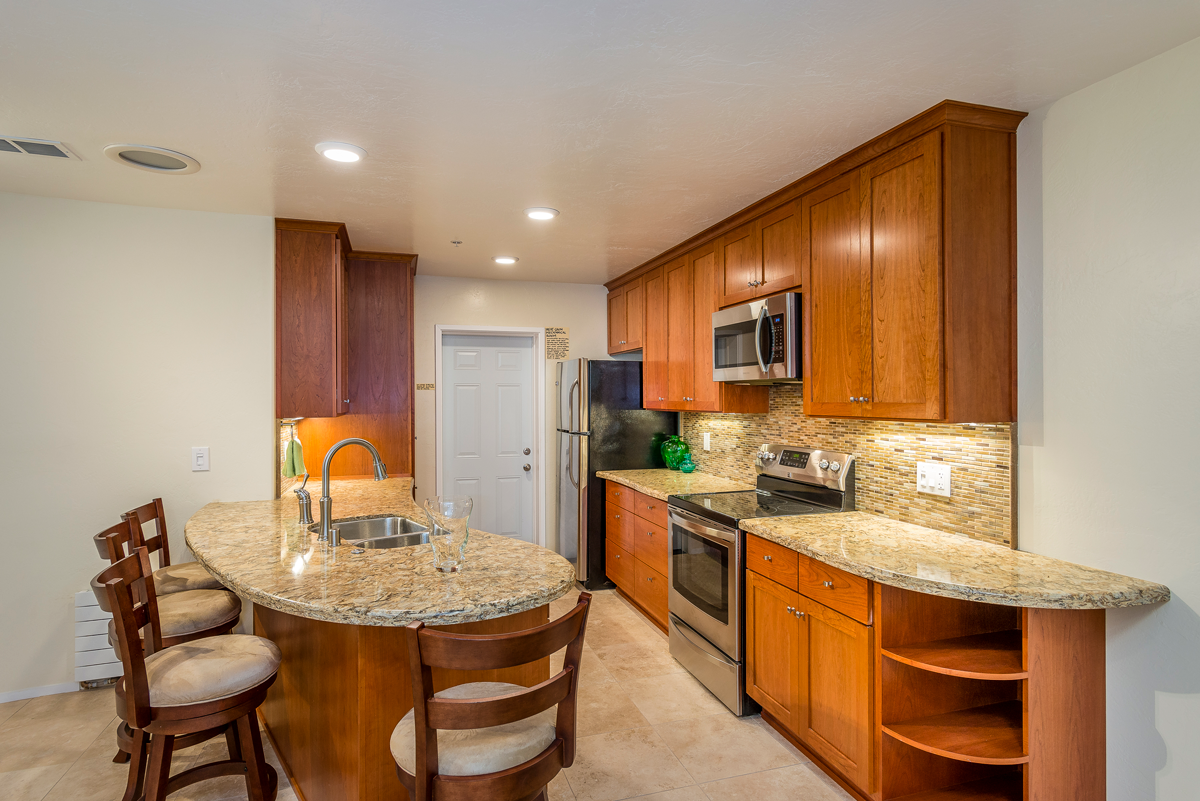 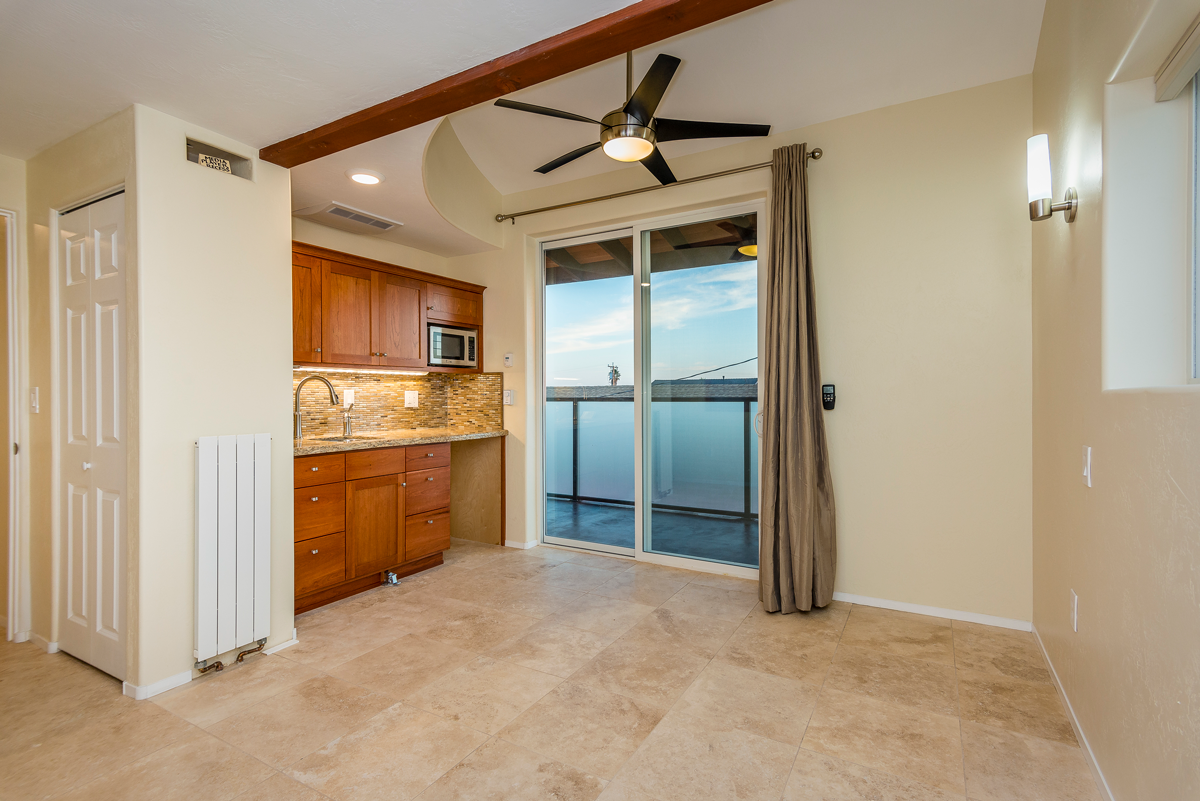